The N.S.R.F.C. Hall of Fame was founded in order to recognize the importance of the history and heritage of the Reds style of play, and the support that should be recognized for those to come. The function of the voting members is to recognize those players, coaches, and administrators who had a significant impact on the Reds game in their era. Every year, North Shore Rugby inducts a new Rugby Great in a prestigious ceremonial dinner.

The Hall of Fame boasts simply ‘the best of the best’ to have played for the Reds since 2002. To be inducted into The N.S.R.F.C. Hall of Fame is the pinnacle of recognition for Rugby players and supporters of the Reds. 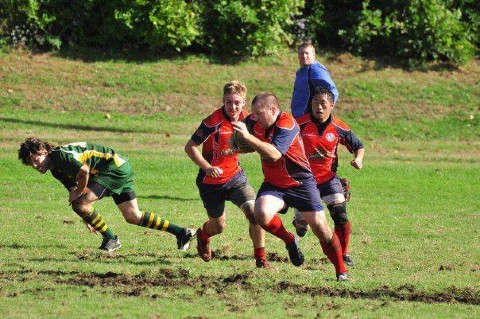 If there was one way to describe Bobby Moran, everyone would say Fred Flintstone. The man knows how to move his feet on the pitch, creating an illusion of prop like stature with the swiftness of a gazelle. But Bobby Moran is more than a swift prop like gazelle on the pitch. He was a leader in his own way by leading through action, creating endless opportunities for his teammates on the pitch by forcing defenses to fall apart as they scrambled to try and contain his jukes and jives. Bobby is also a man of few words, but when he spoke, everyone listened. Needless to say, Bobby is not the prototype wing.

John Rice When Bobby showed up, everyone assumed he was a prop. That was until he propped and removed all doubt. No man makes people miss like Bobby and his Flintstone feet and those who underestimated him always paid dearly as he juked and jived his way to the try zone. 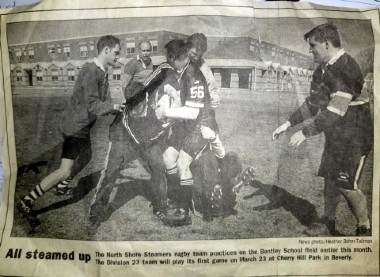 Bobby still makes cameo appearances now and then and he's a bridge from the early days of NSRFC. He hasn't ruled out getting back out there someday, but for now he's raising future NSRFC legends. Bobby holds the distinction of being perhaps the most capped player in North Shore history. A quiet, fierce competitor on the field, Bobby is one of the nicest guys off it. He's a great example of what rugby means and embodies the spirit of NSRFC. And to that, we say welcome to NSRFC Hall of Fame Bobby Fred Flintstone Moran. 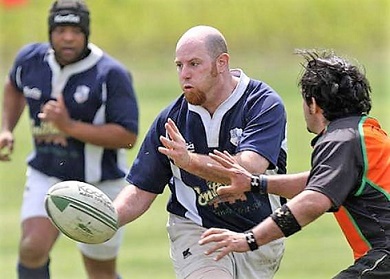 If there was anyone you could say that put it all out there no matter what number he wore, you would think of no other than Mark Swan. Swan is as much of a North Shore OG as they get. From center, to lock, back to center, back to lock, Swan was a cruise missile in the North Shore arsenal. Swan was the blueprint for the big, hard charging center, breaking tackles and gain lines along with the spirits of the opposing team.

Zac Cook Swanny is the person who defined the #12 jersey for me. Big enough to power through, agile enough to go around and loud enough to keep everyone in line. Though his skills shined it was always the emotion he played with that inspired the team around him. Probably the most influential NSRFC member on my rugby development. As far as I’m concerned #12 in the red jersey will always be Swanny.

As durable as they come, he was a player you could always count on, providing leadership on and off the field. Despite hanging the boots up as a regular player, Swan still makes time to make the occasional appearance around the team and is usually first in line to join the Old Boys games. 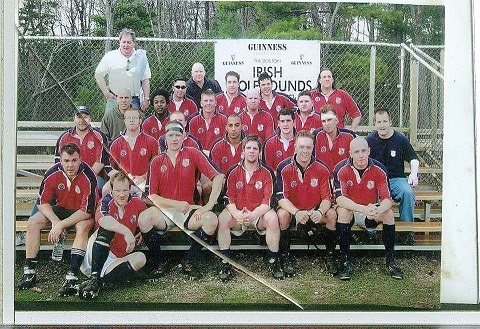 Although the post game singing culture seems to be a dying art in rugby, Swan was always one of the first to join in or lead the team in song. His rendition of Barnacle Bill with Devo might be one of the most entertaining pieces of music we've ever seen.

Ian Nichols My favorite Swan memory was the Seacoast game in Danvers the night after a deluge of rain that basically ruined any chance of using that pristine pitch ever again. Swan got moved to the pack late in the game after an injury to our 2nd row. We are closing in on 40 scrums for the day. We get three in a row as soon he comes in, he furiously turns to the back line, as if he never knocked on that day and yells “Will you fucking backs stop dropping the fucking ball?” Immediately endeared himself to the pack.

Swan was a great teammate and captain for many years. Durable, tough as all hell, and an underrated tackler. He was a force for sure whether he played forward or back. That is why it the pleasure of North Shore Mens Rugby to have Mark Swan in the Hall of Fame.

Ken was always selfless and fiercely loyal to North Shore.

One of the NSRFC originals, Ken was without a doubt the club’s emotional leader from our inception. Ken brought intensity, fearlessness, and grit to each and every breakdown as well as in open play. Tireless around the pitch, Ken made everyone around him better.

Though a natural #8 Ken was always selfless and played anywhere he was asked. Whether it was second row, back row or even in the back line. Ken always made an impact. Known for his low, aggressive work in the breakdown, Ken was actually penalized once for rucking an opponent too savagely.

He was also a weapon on offence, gaining hard yards among the pack or jumping into the back line with ease. Ken scored his share of tries and was a key man supporting the backs who pissed off by themselves.

Ken’s booming voice could be heard anywhere on the field. It served as a beacon to all forwards that “you should be here!” Ken was once referred to, by the captain of the Shannon RFC side NSRFC played in Ireland, as “The loud fella.” Whether on tour or in a local dive bar, you can always find him with a wide grin.

Ken always will be a North Shore rugby player, and his induction into the NSRFC Hall of Fame is well-earned. 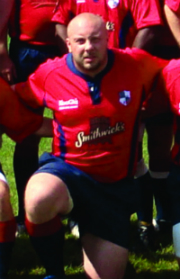 Chris Smith is a North Shore club legend who epitomizes the expression "leave it all on the field." Never has one of our players played through so many injuries and still made such an impact on the pitch.

Earning the nickname "Captain Crunch" for his bone-jarring tackles, Chris also did all the dirty work in rucks and mauls with a combination of experience, technique and grit. And he scored some tries along the way.

Two notable "CLS" moments: He scored the first-ever try in NSRFC history in spring 2002 against Wentworth. And a few years later, he took on a monster of a loose forward from our then-rival Middlesex in a huge open-field collision, asking "how YOU doing" before delivering one of his textbook tackles.

Chris was one of the hardest workers we've ever seen on the pitch, and he bled North Shore red. He also contributed greatly off the pitch, procuring our first home pitch at Cherry Hill Park and giving his time and energy in various executive committee roles.

A true rugby junkie, Chris could talk for hours about international rugby, and did just that whenever he encountered a new accent at a drinkup.

He was a true leader, selfless contributor to the club, and mentor to many young players who joined the club along the way. We thank Chris for the countless ways he has helped the club over the years. 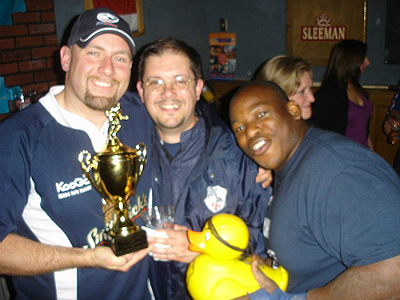 Gus put the word out, and among those who joined up were rugby journeymen Liam Brady, Cam Williams and Dan Solomon. They would become core members of NSRFC, and a new club was born...

In addition to being the founder of NSRFC, Gus led the team in battle as our scrum half for much of the club's first decade, stepping in at fly half or hooker as needed. He was known for calm decision making mixed with his fiery Argentine spirit, helping NSRFC field a strong side each season.

In addition to his time on the pitch, Gus spent countless hours contributing to the club's administration as President and in other executive committee roles, a living legend. Gus still takes the field for the occasional b-side or old boys match and took part in our recent Montreal tour.

We thank Gus for his dedication and for laying the groundwork for so many NSRFC ruggers that have followed.